Is Bishops Williamson’s-‘Cunctator-s’1 Coat-of-Arms
a Rosicrucian one ? 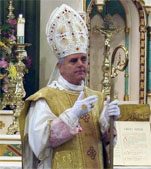 The Coat-of-Arms of Bishop Williamson (said also ‘Cunctator’) is adorned
by a rose put on the middle of a « adorned with flowers » cross. Why such a symbolic ?
How could one ignore its complete similitude with the Rosicrucian Coats-of-Arms ? 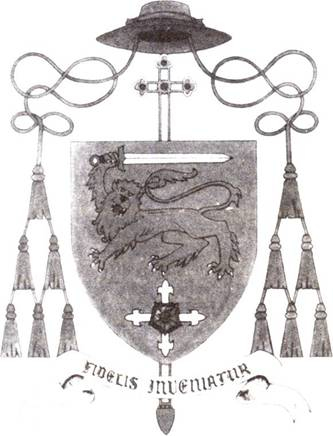 We already have pointed out, in a message of December 18 2006, by commenting about the creation by the New Rome of the Good Shepherd Institute, that the same symbolic of the Good Shepherd has been adopted by the 18th° Rose+Cross degree of the Freemasonry, and we then have revealed the very meaning that, according to the founder “Patriarch”-« bishop » of the Gnostic Church (1890), called soon Catholic Gnostic Church (sic), Jules Doinel, called Valentin II, the Freemasons give usually to this same « symbolic ».

It is displayed hereafter :

« The luciferian mystery of the Rose+Croix

The symbolic of the rose on the cross becomes a negation of the Redemption accomplished by the adorable sacrifice of Our Lord Jesus-Christ : its very meaning is the seal of silence of the annihilation sealed on the very efficiency of this Redemption : it aims to make obstruction to the flowing of the very sacramental graces that the Rosicrucians hold in abomination.

« What does mean then the Rose of silence seled on the Cross and on this very place of the Cross where was laying the crowned head of the Lord ? Its very meaning is the seal of the annihilation of the effects of the Redemption. The Rose stick on the cross is nothing else than the annihilation of the work if the Cross. And, Lucifer alone could have had such a thought. He alone was able to conceive such a monstrous aim. » J.Doinel

And Jules Doinel (33th degree) quotes a speech done in a back-lodge :

« This Means will then be to seal (sic) the Cross, like one seals a precious testament that one wants to make useless. We will then put on the Cross the Seal of the Rose. WE WILL IMPOSE SILENCE TO THE CROSS. And the Cross, once be so silenced, will so cease to speak to the men about salvation and duty, which are not the duty to which we are devoted, neither the salvation that we are longing for. By the other hand, Catholicism will be deprived from the Cross and from the fruits of the Cross, which are Charity, Abnegation, Patience, Forgiveness for the offences, and the reformation of the individual lives, as of the social life will be impeded. Catholicism will then loss all its prestige and also its effect on the smarted minds, first, on the large masses, then. Let the Cross be sealed ! » J. Doinel

When the Rosicrucians do sprinkle their works and symbols with roses and crosses, we should absolutely not see it as acts of piety, but on the contrary we should see this very « seal » with which they sign their work for the extinguishing of the supernatural graces which pour from the Sacrifice of Our Lord on the Cross, their work by which they intend to impeach the blood and the water to pour onto us from the Sacred Heart of Our Lord Jesus-Christ, open by the spear. »[2]

In this same message of December 18 2006, we also have pointed out what follows, on the french speaking SSPX’s web site Dici.org, on which it has been displayed an image showing a Rose and a Cross as an illustration of de SSPX’s sacrilegious[3] so called « spiritual bouquet » :

Photographic arrangement made and displayed by Dici.org
as presentation and symbolic illustration of the Rosaries « Sheaf »

The arrangement made on the photography of the "spiritual bouquet" : a Rose + a Cross, and on the cross of the chapelet, instead of Our Lord crucified, we find the motto PX (abreviation for Pax and Pax Christi ) which can be founded on the contemporain pascal cierge, as well as in the new editions of the catholic Missals since several years. Remarquable Coïncidence : this PX is to be compared with an other ritual symbol, the Pax Vobis of the mutual salutation of the Rosicrucians.

Here is an example if the Coat-of-Arms of an initiated Rose+Cross : 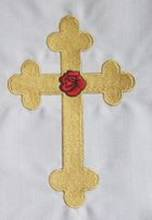 Our questions to Bsp. Williamson-‘Cunctator’

Bsp. Williamson-‘Cunctator’ having been a fervent disciple of Malcolm Muggeridge[4], who, himself, with his own two sohns, were closely tighted with the groups of the Fabian Society, with the Anglicans and et the High Church (closely united with the british illuminist masonic lodges), one of his two sohns being even member of the darbyst apocalyptic illuminist sect of The Plymouth Brethren, sect which is today furiously christiano-sionist and very involved today with the direct environment circles of the US Administration, and sect of which were fanatic adepts the both parents of the famous satanist Magus Aleister Crowley[5], so are we now deeply wondering and worrying about this Coat-of Arms and this Motto chosen by Bsp. Williamson for his catholic Episcopal consecration.

And what does his Motto mean ‘Let him be found loyal’ ?

Such a Motto is utterly ambiguous, it allows for a double interpretation.

WHAT IS AMBIGUOUS CANNOT BE CATHOLIC.

And these very strange peculiarities do not even stop there :

And the pentagon almost does not appear.

We are also forced to ascertain that the police and the fonts of the Motto in 1990 are different from those of 1988, date of his catholic Episcopal consecration at Ecône. In 1988, they are usual and normalised, in 1990, they are blatantly gothic, and it is well known how this kind of gothic polices and fonts are actually valued among the Anglo-Saxon circles of the Rose+Cross. 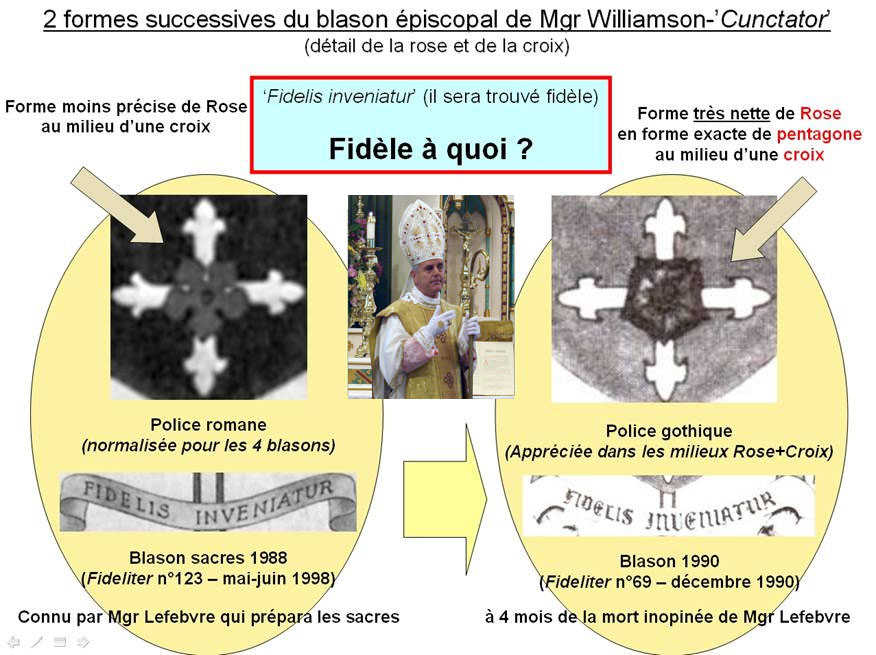 And very curiously, the (modified) Coat-of-Arms and Motto of Bsp. Williamson have been published by Fideliter only at the end of the year 1990 (november-december issue), that is to say at least two years and an half after his catholic Episcopal consecration, that is to say only about a dozen of weeks before the unexpected death of Archbishop Marcel Lefebvre, the Founder of the SSPX.

Why, for Bsp. Williamson, having them published so lately ?

Let us continue the good fight ! 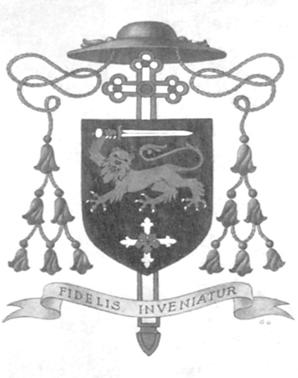 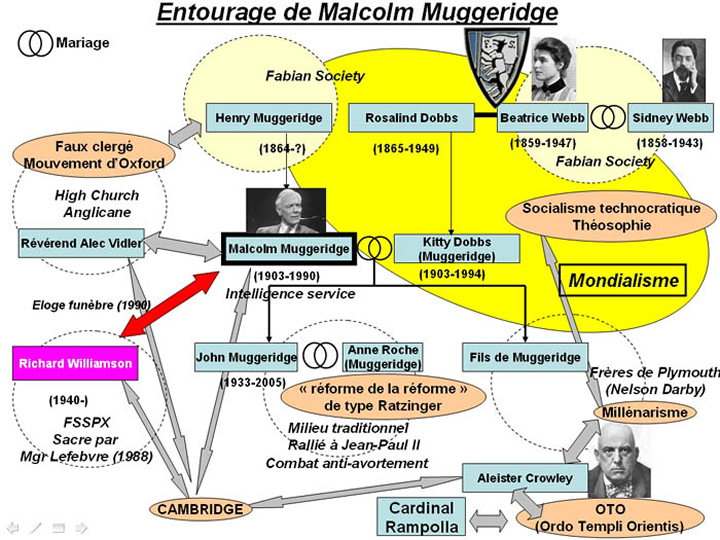 [5] Aleister Crowley, who has worked for the british MI6, former high Dignitary of the illuminist satanist british Sect The Golden Dawn, about which some observers state that the Fabian Society would be actually nothing else than an outside circle of this satanist Sect (*), has been High Master of the illuminist satanist Bavaro-Swiss Sect The Ordo Templi Orientis (OTO), located in München and Einsiedeln (**), Sect of which the Leo XIIIth’s Secretary of State, Mariano Cardinal Rampolla del Tindaro, was actually one of the high Dignitaries when Leo XIII died on the monday 20th of july 1903, and when he was almost succeeding to this holy Pontiff.